The Lucy Variations, by Sara Zarr 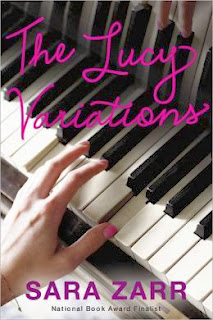 Eight months ago, Lucy walked out on her concert in Prague, after discovering that she had been betrayed by her family.  Sixteen years old and already an established concert pianist, her future had looked bright.  But now she's quit music altogether and her family can't forgive her.  Their hopes are now pinned on her younger brother, who's apparently a wunderkind himself on the piano.

While Lucy herself would deny it, she really does want to play again.  In the end, it is her brother's new teacher who reawakens that desire to play again, but it is no easy matter.  Can she find a way to enjoy the music itself, without the pressure of performance?  Can she play without her family's expectations or judgements clouding that joy?  And what about the teacher himself?  He's supposed to be teaching her little brother, and yet Lucy clamors for his attention, virtually stealing him away.  And despite the fact that he's married, Lucy finds herself recklessly drawn to him.

Zarr's books can be hit-or-miss, but I liked this one.  There are plenty of other books out there about young musical prodigies and more than a few about forbidden teacher-student relationships (what's with all the lecherous music teachers out there, anyway?), but Zarr keeps this one fresh.  First of all, because the characters are too knowing to fall into tragic tropes.  More importantly, though, because Zarr keeps the focus on Lucy's family.  There are many complexities, from Lucy's brother's jealousy to her grandfather's obsessions to her mother's guilt.  Even the father, who starts off rather weak, shows strength and comes into his own by the end of the story.  The non-family characters (Lucy's friends and colleagues) are less interesting, but I'm willing to let that go as the main story of Lucy's journey to break free of her familial bonds ultimately is so engrossing.
Posted by Paul at 7:20 PM