The Moon and More, by Sarah Dessen 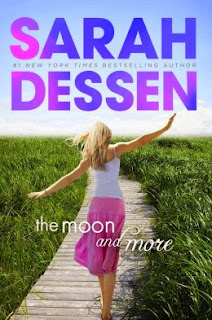 In her last summer before college, Emaline has a lot of decisions to make.  Living in the small coastal town of Colby, there aren't too many opportunities, but she wants to reach for anything she can.  And she's looking for encouragement wherever she can find it.

Her life has been defined by her relationship with her (adoptive) Dad and her (biological) Father.  Dad has always been there for her but not been too ambitious, while Father showed up only infrequently but pushed her to succeed.  At the same time, Father's let her down recently, bailing on her just as she almost realized her career dreams.  A similar tension develops when Emaline meets ambitious Theo, in town to help on a documentary about a local artist-celebrity, and she chooses him over her long-term safe boyfriend Luke.

It's a summer beach story with a complicated storyline:  Emaline sorts out these complicated relationships she has with men and tries to figure out how to realize her dreams.

Sarah Dessen is a fantastic writer, with a major talent for expressing emotion and turning beautiful prose out in (increasing-longer) novels.  She also creates complicated and realistic young women on the cusp of adulthood like no one else in the literary world today.  No one should doubt her talent.  But, while Suzanne Collins can decimate a population and overthrow entire regimes in 400 pages, Sarah Dessen can barely get her heroine around the block of a small coastal Carolina town in the same space.  To say that barely anything really happens in the story might be overstating things (lots of stuff happens between chapters), but Dessen hates writing action sequences.  She would rather do all her action in recap and kill forests of trees in service to dialogue and emotional responses to the (off-screen) action.  That isn't all bad (and the focus on emotion is a trademark - and stereotype - of chick lit), but is seems a bit of a cop out when you're reading a 440 page book.

Emaline is an amazingly well-developed character.  Perfect for a sleepover and maybe a new BFF, but she doesn't really do very much in this story.  And, like so many other Dessen heroines, she's terribly autonomous and isolated.  That's all to be expected, but most of the time, it's interesting.  Here, I feel like I've read this character before and seen better.  In sum, it's another Dessen installment, but not one of the best of the lot.
Posted by Paul at 8:41 PM