The Paradox of Vertical Flight, by Emil Ostrovski 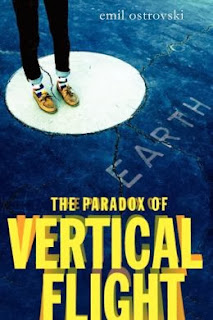 My Alma Mater (Vassar) has contributed a fair number of YA writers to the world (most notably Emily Jenkins/E Lockhart). Here comes a new one...

Jack is interrupted in the midst of a suicide attempt brought on by existential angst with a phone call from his ex-girlfriend, Jess.  She's about to give birth to their baby and - out of the blue - asks him to be at the hospital with her.  That reunion doesn't go so well, but Jack is so struck by the momentous idea of being a father that he decides to kidnap the baby.  A madcap road trip to take the baby to meet Jack's grandmother ensues with Jack, his best friend Tommy, and Jess and the baby in tow.

Very much the boy book, the novel is liberally littered with scatological and raucous humor, some implausible adventures and a fair amount of irresponsible and illegal behavior.  There's a fair amount of the razzing that passes for male bonding and the girl definitely gets short changed as a character.  In case you don't get it, I'm not a fan of the genre but occasionally feel obligated to read a book intended for young male readers.

But Ostrovski has other higher (and contradictory) ambitions for this novel.  Jack is a philosophy aficionado, names the baby Socrates, and engages in long imaginary discourses with the child throughout the book.  This mental masturbation is fairly dull (and I studied philosophy at Vassar just like the author!), largely irrelevant to the plot, and really far out of character.  The topics of the conversations might thrill an undergrad, but since Jack is supposedly a high schooler, it's a little hard to believe that he would have the knowledge to know these topics (even if he's a bright kid, how many high school teachers can expound intelligently on Nietsche?).  The literary conceit simply didn't work and it fills a great deal of pages (particularly towards the end).  Might have been better in an adult novel, but it hangs on awkwardly and will search hard for an audience.
Posted by Paul at 5:11 PM