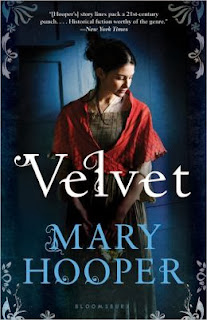 It's the Turn of the Century and Velvet is sure that her fortunes are about to change.  She ekes out a living in London as a laundress, working long hours in back-breaking labor.  So, when one of her wealthy customers, Madame Savoya, offers her the opportunity to join her household as an assistant, she thinks her dreams have been realized and she accepts the promotion without a second thought.

Her new mistress is a medium and Velvet is introduced the arcana of seances and spiritualist sessions.  Velvet's never given much thought to "the other side" (as Madame calls it), but she notices early on the great comfort that communicating with the deceased bring their grieving relatives.  It is only later that Velvet begins to notice suspicious events and begins to question the motives of her new employer.

Another richly documented historical novel from Hooper.  Picking up some related material from Fallen Grace, we get a thorough introduction to the Edwardian obsession with the occult and some of the unsavory practices of the era.  There is the expected attention to detail in clothing and dining, as well as a lot of information about everyday life in London.  The story is a bit predictable, but Hooper unfolds the story well and the pace is lively.  Combined with the well-developed setting, this is a satisfying read.
Posted by Paul at 5:51 PM