You Look Different in Real Life, by Jennifer Castle 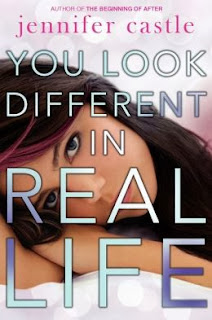 Ten years ago, Justine and four other kindergartners were placed around a table and interviewed on film in what was to become Five at Six - a groundbreaking documentary about growing up.  Five years later, the filmmakers returned and produced a second installment, Five at Eleven.  Now, it's time for a third visit to the kids.  However, in the intervening five years, things have changed dramatically and the inseparable children have become sullen adolescents with hidden dramas that they no longer want to share with the world (for Justine, it is the nagging feeling that all the promise she showed at eleven has fizzled into nothing and she has become unremarkable and unworthy of the attention).  The filmmakers' initial attempts to reignite the chemistry between the kids falls flat. But then a crisis occurs that brings the five together again and helps them come to terms with what drove them apart.

What starts as an interesting premise (more on that below) turns fairly conventional as the crisis that pops up mid-book turns this potentially deep study of changing priorities in adolescence and the process of coping with fame, into a predictable kids-hit-the-big-city adventure.  At that point, the book for me becomes dull and unremarkable.  A series of challenges brings the kids back together again into a tighter bond and Justine finds her special talent.  It's all very Disneyesque.

The draw of this book for me was really the premise itself.  I'm a big fan of Michael Apted's Up series (the obvious inspiration for this story).  Last year, I had the opportunity to watch a screening of 56 Up where Nick Hitchon (who lives near me) was in the audience.  He was seeing the film for the first time and afterwards spoke about the experience with the audience.  What I learned from him was how emotionally wrenching it is to be part of the film and what difficulty the participants go through every seven years.  It made a deep impression and I was interested to learn how Castle would approach this fertile material.

In the first couple of chapters where Justine is struggling with whether she'll participate or not and where she recounts the embarassments of being in the film, I heard a great echo of what Nick had told us and thought that I was going to get a lot out of the novel.  However, apparently it wasn't enough to sustain Castle.  The shift into high gear action addresses the issue of the separation between the kids and ties up some loose ends from their past, but we never really revisit Justine's (or any of the other children's) ambivalence towards the project.  That's really a shame as it was the most unique and original part of this story.
Posted by Paul at 5:31 PM