A Really Awesome Mess, by Trish Cook and Brandan Halpin 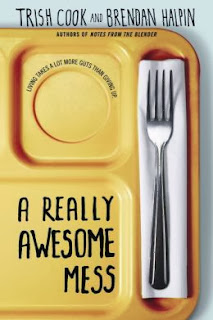 Any book that significantly name drops my alma mater Simon's Rock deserves a special shout out, even if a main character disses the school in the end.

Emmy and Justin have both been involuntarily committed to Heartland Academy, a residential facility for troubled teens.  From their own accounts, their offenses seem minor and the punishment is disproportional.  However, by the end of the third chapter, the reader can clearly see what their issues are.  It takes the rest of the book for the characters to finally admit their problems.  Through friendship with the other kids in the program and the experience of adopting a pet piglet, they come to terms with these issues and begin to rebuild their lives.

{An aside:  Residential psychiatric programs for teens are an essential literary device in YA lit for getting a bunch of screwed-up teens together without parents (filling the void left by the demise of the boarding school genre).  Given how poorly the kids in these stories are monitored, one wonders how the institution survives, but I digress!]

The book is a team effort with Cook and Halpin trading off writing the story (a popular experiment in writing seminars and one that leads to far two many published books).  It suffers from a common issue with the format -- a general incompatibility of the writers.  The book starts off fine, but Trish Cook's attempts to write a straight story with insight are quickly derailed by Halpin's gonzo writing.  He'd rather gross-out the readers and subvert Cook's attempts to build meaningful dialogue and interactions.  In her chapters, the story is actually formed, but then Halpin comes in like a typical preschool boy and knocks everything over, leaving things a mess for Cook to dutifully clean up in her next chapter.  By the end, I cringed each time I started to read Halpin's chapters (fearing what damage he would do).  It wasn't cute and it wasn't interesting.  It was simply plain dumb.  Maybe Cook should write her own books instead?

And I think Emmy missed out by not going to the Rock!
Posted by Paul at 7:23 PM