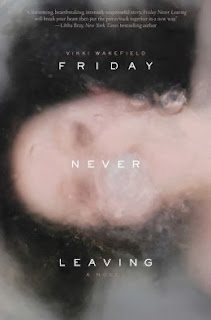 Friday has never felt rooted in any one place.  Years of living on the road and in the bush with her nomadic mother ensured as much.  But she always had Mom...until she didn't.  After her mother dies of cancer, Friday is cast adrift and leaves her grandfather's home for life on the street.  Out there, she falls under the spell of a charismatic teen named Arden and a gang of kids that Arden leads.  While uneasy around them, the gang gives Friday the sense of family she has been missing.  Her years on the road growing up, however, make her more savvy than the others and ultimately brings her into conflict with Arden, with deadly consequences.

The characters are well-developed.  It is hard business to develop a large cast of characters and make them vivid enough to distinguish. The kids in the gang are a notably strong cast.  And the dynamic between Arden the leader and each of them is complex and interesting.

The book is nicely written, but the story didn't grab me.  Wakefield put a lot of effort into her writing, and it shows...sometimes a bit too much.  The title (and the cover) are an allusion to a prophecy that Friday will die from drowning on a Saturday (just as all of her female ancestors have).  A nice image, but one which is so obvious in its literary pretensions that you trip over it (you know from the first page that drowning will figure in prominently by the end...and are constantly watching out for any mention of water).  It's the obvious literary pretensions that make this beautiful book feel lifeless.  Too much like a book that you'll be assigned to write a book report on than actually enjoy.
Posted by Paul at 8:20 PM