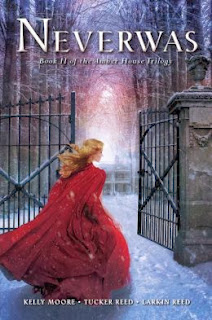 Sarah's father has a dream to unite New England, the Confederate States of America, and the free territories of Astoria in a last-ditch effort to defend the Americas against the Nazi Reich of Europe and the Japanese Empire.  It's an audacious plan for survival in the early 21st century.  It might even work.

Meanwhile, Sarah senses that something is not quite right.  Somehow, she remembers a different version of the present, where the American colonists did not lose their war of independence in the late 18th century, and where England was not defeated by the Germans.  The answers lie again with the famed Amber House and its mysterious "echoes" of the past.

In the sequel to the surprise wonder of Amber House, the mother-and-daughters writing team of Moore and Reed once again spin an outstanding supernatural tale.  The stakes are much higher this time and the story is a great deal more complicated (filled as it is with plenty of paradoxes of time travel), but basically this is another shot at the young female sleuth finding allies (quite literally) in the woodwork.  This time, I have to admit that I never quite figured out what was going on, but that didn't stop me from enjoying the ride and I let the story simply take me along with it.  With that in mind, this may be a book that rewards handsomely in the re-reading.
Posted by Paul at 8:52 PM