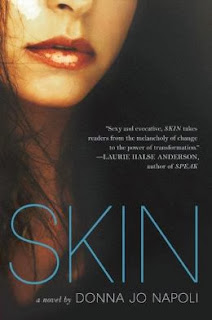 Vitiligo is a rare autoimmune disease that attacks the pigment of the skin and causes patches of white to appear at random locations on the body.  Like other autoimmune disorders, there is no known cause and no real treatment for the condition.  It's chronic and, in this case, not terminal.  Still, for sixteen year-old Sep, it might as well be....

When Sep wakes up one morning to find his lips have gone completely white, she is terrified.  It isn't so much that she has been afflicted with a rare condition, but with how this one manifests itself.  She's a scientist at heart and loves to learn the causes and results of everything.  And what she sees isn't pretty.  Victims of vitiligo are just plain ugly.  Soon, she knows, she will be just as bad as they are.

She hides her condition, applying makeup and strategic clothing to cover up the "splotches" that are appearing on her body, in denial of what is happening.  And she refuses to tell anyone beyond her family and her best friend about the condition (and even then, she tries to obscure how far the condition has advanced).  She even keeps her boyfriend in the dark, until it is too late.

A great story about coming to terms with illness and learning (quite literally) to be comfortable in your skin.  Napoli always does great storytelling, but she usually works with mythic or historical settings, so this is a bit of a new thing for her -- and she does just fine.  The story itself works well because it takes any interesting concept (a disease that no one has heard of that has a particular resonance with image-conscious adolescents), creates a well-rounded character with realistic friends and family, and just lets the story wind itself out naturally.  As Sep grew meaner and nastier to her boyfriend and friends, I started to really hate her, but that was really just a measure of how much she had gotten under my skin.  By the conclusion, she redeems herself in an ending that wraps things up in a nicely sloppy way that felt plain right.  What better way to round out a year?
Posted by Paul at 7:14 PM