The Lost Girl, by Sangu Mandanna 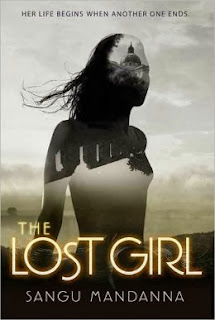 Eve is an "echo" - a clone of a living person -- created and stored at a sufficiently remote distance for the sole purpose of serving as a replacement if something should happen to the original.  Amarra, Eve's "other," lives in Bangalore, while Eve lives in rural England.  Eve's job is to study everything that Amarra does and memorize every key fact about Amarra -- in case she has to step in and take over Amarra's life.  It's a job that is all encompassing, but largely unfulfilling, as few echos ever need to take up their other's life.  And for Eve, whom longs for time to be herself, it has grown unbearable to be enslaved to Amarra's life and be unable to have any life of her own.  And then, there is the small problems of "hunters" (vigilantes who oppose the concept of echos and try to find them and kill them) and also growing instability amongst the "weavers" (the three creators of the echos who work at the "Loom" that manufactures them).

Eve's growing self-enlightenment is interrupted when Amarra is killed in an accident.  Suddenly, Eve is sent to India to take on the role for which she has been preparing.  Despite all of Eve's study, things do not go well as neither she nor Amarra's family are able to adapt to the change.  And as Eve, her new family, and Amarra's friends struggle with the situation, it unveils a deep complexity to the issue.  Eve may have little choice of the role she has been created to play, but for the family that chose to do this, how do they make it work?  And is replacing your deceased daughter with a clone really going to fill the gap in your life?

It's thoughtful and original science fiction.  While paying homage to Mary Shelley's classic Frankenstein, Mandanna has created a finely textured study of the meaning of relationships (both friendly and familial) and of loyalty.  The book runs a bit long and the ending becomes muddled by a subplot about the weavers that is allowed to achieve too much prominence, but the story is quite fascinating.  From the ethical questions of life replacing life as a means to achieve immortality (a topic borrowed from Shelley) to the meaning of self for a clone, there is plenty of thought-provoking stuff here.  Finally, it's nice to have some science fiction placed in India.  While Mandanna doesn't really explore the local color, it is notable as India doesn't often feature in YA lit (or in sci-fi, for that matter).
Posted by Paul at 7:50 PM