This Is What Happy Looks Like, by Jennifer E Smith 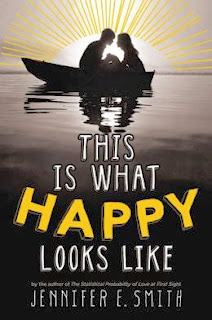 Graham and Ellie met completely by accident when Graham mistyped the address of an email and reached Ellie instead of his pig sitter.  By random chance, they hit it off and traded emails back and forth.  But after months of chatting, Graham has decided to tempt fate and come to Ellie's town to meet her.  And she is in for a big surprise!

No, Graham isn't some creepy 46 year-old guy who reads YA literature in his free time.  He's actually Graham Larkin -- major teen hottie and up-and-coming young actor.  He's easy on the eyes, famous, rich, sensitive, Ellie's age, and miraculously available.  And Ellie is just a plain small town girl from Maine, so she is presumably as out of his league as the readers of this book.

But everyone is not quite who they seem.  Graham's heart of gold belies his fame and his decidedly simple small-town tastes.  And Ellie?  Well, you'll have to read the first 120 pages or so to find out what her special secret is because I'm not going to spoil that secret!

In many ways, this is over-the-top romantic teen fantasy (hot famous guy falls for normal girl).  He's famous but no one understands his true needs except her, and so he is willing to lavish all of his attention on her.  Not that the complete lack of a realistic fiber in this tale makes the story any less fun.  Who doesn't like a story about two totally nice people meeting and falling in love?  The story is adorable and you'll be happy while reading it.

But Jennifer? Check your map:  what part of Maine is located one hour south of Kennebunkport?  If that's where the town of Henley is, then it's somewhere in Massachusetts! :)
Posted by Paul at 12:06 PM