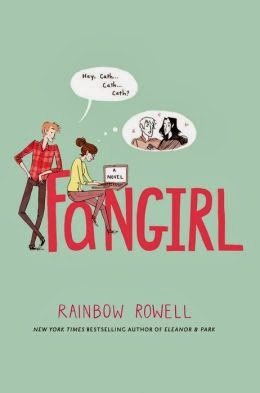 Saying that Cath is a Simon Snow fan is a major understatement.  She and her twin sister Wren are deep into fan fiction, with Cath writing (and Wren editing) one of the most popular Simon Snow stories.  Simon Snow is the world to Cath and has sustained the girls through high school and family trauamas.  But now that Cath and Wren are freshmen at UNL, things have changed for Wren.  She no longer wants to do Simon Snow, being drawn to new social circles and parties.  Cath stays the path, but even she is opening her eyes to the broader world that exists after high school.

It's a book that straddles the line between YA and NA (New Adult) literature.  It's about growing up and (while not letting go of childish things altogether) about integrating them into a grownup life.  That's interesting stuff.  I also enjoyed all the local detail on Lincoln and Omaha, as I remember the area well.

In comparison to Rowell's Eleanor and Park, however, it pales.  Cath, Wren, and their roommates and boyfriends make relatively less interesting characters.  And the story itself is less compelling.  It's a long book and subject to a widespread abandonment of subplots.  To paraphrase Chekhov, if an estranged mother shows up in chapter one, you need to have a big confrontation with her by the last chapter.  Instead, the family traumas (and many other subplots) are allowed to wither without any significant conclusion.  And they could easily have been excised from the book, creating a shorter and smoother story.
Posted by Paul at 11:52 AM