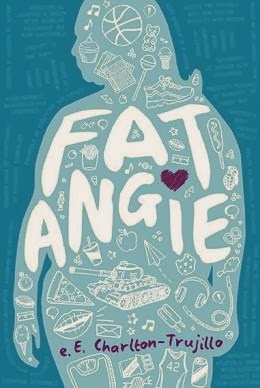 Even if Angie wasn't big and uncoordinated, she would still never measure up to her sister.  But she would never want to do so.  Ever since Angie's sister was kidnapped in Iraq and went missing (and presumed dead), Angie's world has fallen apart.  The loss of her sister has made Angie more of a target to bullying from jealous classmates.  And without her sister to protect her, she is an easier target.  Angie's very public breakdown at the start of the school year didn't help anything.

Her remaining family is no refuge.  Her father is gone.  Angie's brother has turned against her and cruelly attacks her in public.  And Angie's mother accuses Angie of acting up for attention and uses her sadistic version of tough love on her daughter.

Her life, in sum, is hell, until a new girl named KC shows up.  KC is beautiful, West Coast cool, and ardently loyal to Angie, coming to her defense and helping her see beyond the abuse.  Angie can't begin to imagine how she has managed to luck out so much.  KC, however, has issues of her own and they complicate Angie's life further.

The story plays its hand very coolly.  The family may seem unnecessarily cruel, but friends are found in interesting places (in particular, from a gym teacher and a jock at school, who both look out for Angie).  It's a depressing story that you really want to end well.  Charlton-Trujillo teases a bit with partially happy endings, but the real conclusion leaves a lot of things messily unresolved.  That's not as satisfying, but it feels much more authentic.  The story has a lot of things going on:  family drama, sports competition, and love story, and it manages to balance it all fairly well.
Posted by Paul at 12:08 PM