Half A Chance, by Cynthia Lord 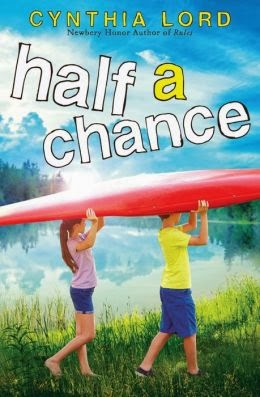 Lucy has moved to a new home on a lake in New Hampshire, just in time for the summer to start.  She quickly befriends a neighbor boy Nate, who is her age.  It won't be a long-term thing,because he is only spending the summer on the lake.  This doesn't stop them from becoming friends as they take part in the Loon Patrol, which monitors the lake's breeding pair of Loons.  Nate also helps Lucy in assembling her submission to a photography contest.

Their summer is darkened by two things:  another girl named Megan who is jealous of Lucy and Nate's new friendship, and the growing demise of Nate's grandmother who is losing her sense of reality (and afraid of becoming a burden to her family).  The former thread is never completely pursued, but the latter one combines a lesson about growing old gracefully with a bit about letting go of things.  It ends up providing the story with a nice poignant ending.

This summer story about a girl and boy developing a friendship is full of all the sweet and innocent stuff that one expects from a middle reader.  There aren't a lot of surprises, but it's a nice story that you can simply enjoy.  Sort of the tween version of a summer romance (boy and girl have adventures and fun, but we don't get into any kissing stuff!).

[Disclosure:  I received a review copy from Scholastic Press in return for my consideration.  After completing this review, I will donate this copy to my local public library.  The book will be released in late February.]
Posted by Paul at 4:18 PM