Manor of Secrets, by Katherine Longshore 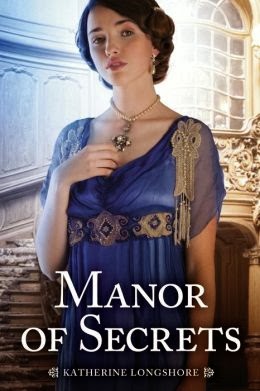 Lady Charlotte lives a life of luxury, but her existence is hardly happy.  She envies the kitchen maid Janie, who has the freedom to pursue her dreams.  Charlotte meanwhile is bound by her mother's oppressive rules and has little to look forward to beyond marriage to a boring local lord.  Janie, on the other hand, longs for Charlotte's pampered existence.  For Janie, live is about constantly being on the verge of poverty; only a wrong step away should she be dismissed from service.  She would give anything to have Charlotte's comforts.

A chance encounter in the woods outside the estate (where neither girl is supposed to be) brings them together in friendship and secret rebellion against the roles they must play.  It also helps them see the truth behind the rosy appearance of each other's lives.  However, the manor won't tolerate any fraternizing between upstairs and downstairs.  Too much is at stake in the calcified hierarchy that has developed.  As the two girls grow closer, the scandal that is unleashed throws the entire household into disorder.

With an obvious debt to Upstairs Downstairs and Manor House (and probably Downtown Abbey as well), we get a junior version of the Georgian soap opera genre.  It's highly sanitized and a bit too Americanized for my tastes, but I can see the appeal.  Glamorous gowns, some forbidden love, a little acting out, and a whole lot of convenient coincidences in the end to make it wrap up neatly.  It would seem to be a perfect candidate for moderate commercial success and maybe even spawn a sequel (and a few copycats).  It's not great literature, but that's not its role either.

[Disclosure:  I received an ARC from Point-Scholastic for the purposes of reviewing this book (it is scheduled for release on January 28), but no other compensation for my consideration]
Posted by Paul at 11:26 AM