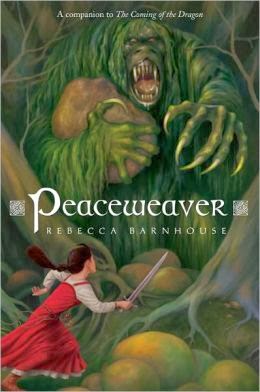 Hild has grown up in a privileged existence as the daughter of the king's sister.  And while her uncle has, in recent years, fallen too easily under the advice of short-sighted and war-mongering men, he is a kind man.  So, when Hild saves the king's son from an assassination attempt, she is confident that she will be honored by a grateful father.  Instead, she is accused of being possessed by demons (on account of her instinctive recognition of the assassins before they had attacked) and she is threatened with exile.

Instead of exile, she is betrothed to the son of the recently-slain king Beowulf from the neighboring (and hostile) kingdom of Geat.  Geat was, until the betrothed prince slayed it, terrorized by a dragon and has suffered greatly from years of the beast's attacks.  But it was always a backwards place and hardly suitable for Hild.  Her situation is worsened because Hild learns on the eve of her departure that her uncle intends to betray the peace that the betrothal promises.  He's using the marriage as a ploy to camouflage plans to strike against Geat.

A richly-drawn fantasy, deeply rooted in Norse culture, with a fair bit of the epic of Beowulf thrown in for good measure.  Hild is resourceful, strong-willed, and handy with a weapon, but also annoyingly indecisive.  This is the primary weakness of this colorful novel.  Most of the story is spent with her plotting to escape -- trying to figure out a way to get away from her uncle, from the Geats, and eventually from her uncle again.  However, each time she does actually run, she reconsiders and comes back on her own free will.  This gets tiresome as it feels like a lot of lead up for nothing.  And given the vast number of unresolved plot points, the energy could have been much better directed on the parts of the story that really matter.
Posted by Paul at 7:24 PM