Better Nate Than Ever, by Tim Federle 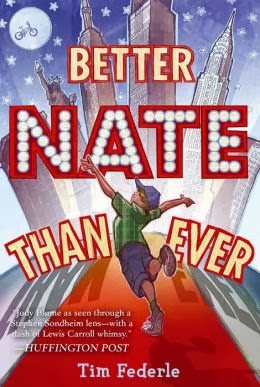 Thirteen year-old Nate dreams of making it big on Broadway.  Not just for the fame, but for the chance to escape his small town Western Pennsylvania existence.  He's tired of being mocked for being short and fat.  And he's tired of everyone assuming that he's gay (he's, in fact, decidedly undecided on the topic!).  So, on a weekend when his parents are away, he slips out of the house, buys a bus ticket, and makes his way to New York City to audition for a new musical based on the film ET.

It's quite an adventure for a small-town kid, and Nate's innocent and wide-eyed love for the Big Apple is a major part of the book's charm.  Nate learns in short order how to manage the chaos of the street as well as the ropes of the audition process, and he does both in his own unique way.  Through the intervention of his long estranged aunt, he also learns some family history and opens some doors.  And, while the subject of Nate's sexual orientation is addressed only fleetingly, it is obvious that he is beginning to have revelations on that front as well.

As with many books targeting middle readers, the frankness and sometimes "adult" nature of the story may make grownups squirm, but at a distance, it all seemed quite age appropriate.  For children too young to understand everything, the sympathetic Nate and the lack of serious harm that befalls him will make the book entertaining and enjoyable.  As a grownup, Nate's string of good luck seemed improbable, but it is in keeping with the spirit of this fun adventure, which promises a run of sequels.
Posted by Paul at 2:58 PM