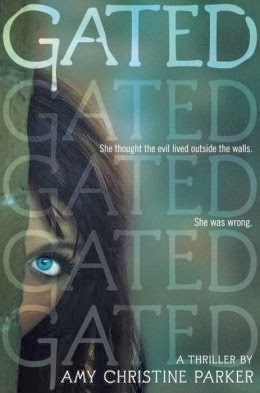 Lyla feels safe in the Community.  Thanks to the wise leadership of Pioneer, her family and twenty other families will be saved when the End comes.  They will simply barricade themselves inside an underground bunker and hold out against the Outsiders.  If there is anyone she fears, it is the Outsiders!  It was one of them that abducted her sister in front of their house in NYC so many years ago.  But now she is with friends.

However, as the End time draws near, Lyla begins to notice that things are not quite right.  Pioneer doesn't always appear to be acting in their best interests.  And a chance encounter with an Outsider, a boy named Cody, opens Lyla's eyes to what is really going on.  However, as she tries to awaken her family and friends to the true source of danger in their midst, Pioneer turns his deadly attention directly on her!

A very tense (and bloody) thriller.  This one is definitely not for younger readers and it contains a fair amount of blood, major animal cruelty, and disturbing scenes.  The outcome of the story isn't terribly in doubt, but thanks to some excellent writing it remains a nail biter to the very end.  So, if you have a thick skin, this one is worth reading.
Posted by Paul at 2:29 PM