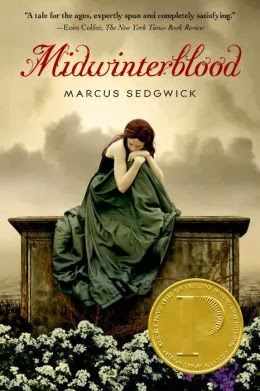 In seven short stories, told in reverse chronological order, we get the inter-related tales of Eric and Melle, and the isolated northern island of Blessed through the ages.  Some of the stories feature the rare Dragon Orchid, some an immense painting, and all a sense of historical destiny which we only learn the full truth of when we travel back to its source.  Not only does the era of the setting change (the first story takes place in the late 21st century, while the earliest is pre-historic), but the roles played by the characters change as well over time (adults become children, children adults, and even genders are switched).

It's a complicated and fascinating ghost story.  While slightly marred by an epilogue that makes an attempt for a happy ending, the seven stories within this book are rich and each stands on their own.  Together, they weave a compelling story that has been masterfully crafted:  elements of one story reappear in another - often to shocking effect.  The story is so complex and carefully designed that subtleties are undoubtedly missed on the first reading (and thus a re-reading is recommended).  The originality of the story captured me and I'll be thinking about it for some time to come.  I highly recommend this book if you like classic ghost stories and don't mind something that will stick in your head for days!
Posted by Paul at 7:27 PM