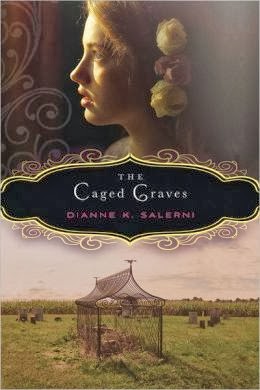 After a long absence, Verity Boone returns to her father's home in Catawissa Pennsylvania, in 1867.  She has been betrothed to a neighbor named Nate and she is returning to marry and settle in her parent's house.  But her return is marred by a sinister mystery -- the discovery that her mother and aunt (who died around the time that Verity was sent away) were buried in caged graves on unhallowed ground.  No one will explain why this was done, but the insinuation is that the two women were witches (and that the cages were intended to keep them in their graves).  An alternative explanation that is floating around is that their bodies were interred with a long-lost cache of Continental Army gold and the bars are intended to protect the loot!

The result of all this is a rich historical novel that, while flirting with supernatural ideas, stays pretty soundly within the realm of the possible in its historical context.  The story is multi-layered and also includes a complicated romantic triangle that I found compelling and mature.  If I have a complaint, it is that the book is being mis-marketed:   despite its seventeen year-old heroine, the story could only passably be considered a "young adult" novel.

I liked the richness of the characters and the complexity of their motivations.  While superstitions and fears at the beginning convince even the reader that higher forces are at play, by the end it is revealed that complex human passions can be far more mysterious than evil spirits.  The story's own mysteries are plausibly and satisfactorily resolved by the end, but still manage to surprise and startle.  Very good storytelling!
Posted by Paul at 1:01 PM