How I Lost You, by Janet Gurtler 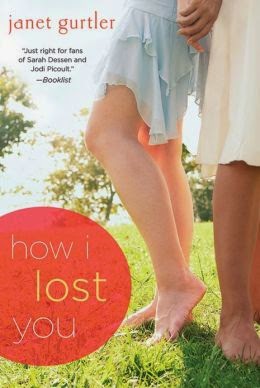 "Buds before studs" has always been Grace and Kya's motto -- never let guys (or anything else) get in the way of your friendship.  Grace and Kya have made plans together.  As two of the best paintballers in the area, they want to join the women's collegiate team at Seattle University (unfortunately fictional, although Seattle U does have a good paintball program!).  They just need to impress the team and keep their grades up.

But as they are approach realizing their dreams, Kya starts to go off the rails -- ending up in risky situations involving alcohol, drugs, and boys.  Her behavior becomes more and more erratic and threatens not only her safety, but both of their plans.  People tell Grace that she needs to jettison her relationship with Kya, and that continuing to defend her friend is going to drag her down.  But it's hard for Grace to let go.  Grace believes in her heart that she has to have Kya's back - on and off the field - and she can't bear to break her pledge.

A satisfying story of friendship lost and the pain that goes along with letting go.  It's a little hard to truly understand the depth of Grace's loyalty from what we can witness in the book (some flashbacks on the girls' past would have helped to fill in why the girls are so bound to each other).  Also, the conflict between the girls in the present grows tiresome, and their fights become repetitive and fail to advance the plot.  But in terms of showing the complicated dynamics of a long-term friendship coming apart, the story achieves its mission.
Posted by Paul at 9:40 PM