If You Find Me, by Emily Murdoch 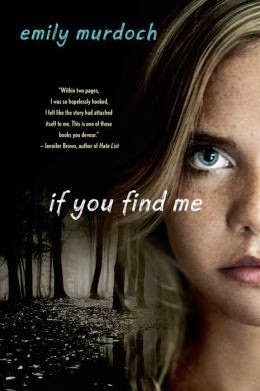 Carey and her little sister Janessa have eked out their survival in an old camper in the woods for years.  Their mother, usually strung out on meth, leaves them alone for weeks at a time.  The absences grow longer and longer until finally she doesn't return at all.  As their food is just about to run out, they are found by a social worker and their estranged father.  Brought back to civilization, the two girls struggle to adjust to their new life and move beyond the terrors of their past.

As you can imagine, it's a heartwrenching story with plenty of opportunity to shock the reader.  I'd be cold-hearted (and lying) to claim that it didn't move me.  However, a few days later as I write this review, the impact of the reading has faded surprisingly quickly.  The culprit in my mind is the roughness of the writing (a narrative that is paced irregularly - skipping forward and sometimes unnecessarily repeating).  The characters also are thinly drawn (with the adults either entirely evil or unbelievably virtuous and self-sacrificing).  Some attempt to draw out the mother and father (and even the step mother) a bit more would have made the situation more interesting.  As is, only the children have any sort of depth.  I get that Murdoch wants to keep the focus on the kids and they certainly have an interesting story to tell, but in the vacuum of capricious and mysterious adults, they are merely pawns for events that the reader wants to understand better.
Posted by Paul at 10:42 AM