The Chaos of Stars, by Kiersten White 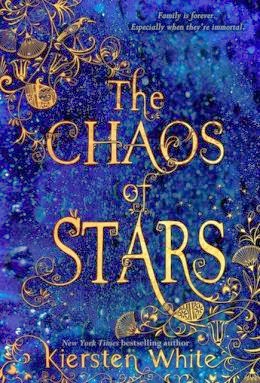 It's really hard to be a kid when your mother is Isis and your father is the Lord of the Underworld.  Isadora's father is literally in a different world and Mom not only thinks she's the Mother of Mankind...she like actually is.  They have an annoying habit of wanting to be worshiped and, anyway, who needs to look at yet another statue of your Mom nursing a pharaoh?  So, when the chance presents itself, Isadora latches on the opportunity to join her older brother Sirus in San Diego.

Once out of Egypt, she makes some friends, meets a boy who looks good enough to be a god (but to the best of Isadora's knowledge is a mere mortal), and helps to supervise the set up of a small exhibit of some priceless odds and ends that her parents have lying around.  There's some danger afoot but Isadora is worried most of all about Mom finding out that her new boyfriend is Greek (for understandable reason, Ancient Egyptian deities don't like the Greeks!).

It is all beautifully absurd and hilarious, and has a nice undercurrent about intergenerational understanding.  The first half works spectacularly well as comedy (mostly based on the premise that modern dysfunctional families share a great deal in common with Egyptian gods) and is lively and fun.  The second half is a decent adventure and mystery, but lacks the originality of the first part.  That could be a mood killer, but overall there is that nice poignant familial reconciliation stuff that gets me all weepy.  It's funny and ultimately uplifting, with a pleasant romantic coating.  Overall, reminiscent of a better-than-average Meg Cabot novel like Avalon High.
Posted by Paul at 9:26 PM