The Reluctant Journal of Henry K. Larsen, by Susin Nielsen 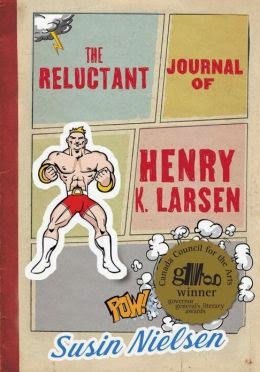 As Henry starts at a new school, he's worried about making a good strong first impression.  He's reminded of the trouble his older brother got into when he didn't do so and he ended up being cruelly bulled.  That took a tragic turn last year when his brother brought a rifle into school and shot the bully, before turning the gun on himself.

Since that tragedy, Henry's family has fallen apart.  Mom has moved back in with her parents and been in and out of institutions.  Dad and Henry have moved to a new town and are struggling to rebuild their lives, come to grips with grief and anger, and keep their past a secret.  Why couldn't life be more like the professional wrestling matches that Henry loves -- where good and evil are well-defined and the good guys usually come out on top in the end?

In all, a pretty sweet book for a story that ought to be difficult and traumatic to tell.  It ends on a saccharine sweet note (which is probably demanded by the young target audience of the book), but Nielsen is restrained and avoids tying too many things up.  This leads me to the book's strongest suit:  the complexity of the characters.  From the non-romance of Henry and his classmate Alberta, to the strained relationship of his parents, the awkwardness of Henry and his best friend Farley, and the great lightening impact of the neighbors bickering, there are some wonderful characters and great interactions.  It's quirky, but very endearing.
Posted by Paul at 12:51 PM