The Tragedy Paper, by Elizabeth Loban 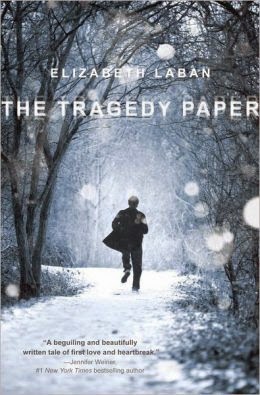 No setting is as tired and trite in YA literature as the boarding school.  Traditionally single-sex (and usually just boys) but nowadays co-ed (and more casual about sexual exploration), the boarding school is always portrayed as a place where poorly-supervised teens spend their days committing petty infractions of the rules that build up to the point of tragedy and heartbreak.  At which point, students are usually dead and teachers' careers are ruined.  Growing up usually occurs.  The difference with this book is that it dispenses with the idea that there is any other purpose to the genre and instead starts us off from the beginning with the idea that tragedy is the central theme of the book.

The story is told a year after the facts through the artifice of a senior named Duncan, who moves into the former room of the tragic student and finds a series of CDs with the former inhabitant's confessions on them.  And it is the tragic figure, Tim who tells his story so that Duncan can both (a) avoid the same errors; and (b) get some juicy material for the "Tragedy Paper" (a senior thesis on the meaning of tragedy) that the students must write.

This is no Looking for Alaska or Dead Poets Society, but it is an interesting and sophisticated take.  Early on, we are introduced to Tim's and Duncan's love interests and it would be obvious to assume that they play a role in the tragedy, but the story is more ambitious than that.  Even Tim's unusual characteristic of being albino is a bit of a red herring.  Instead, the ending is a genuine (but well foreshadowed) surprise.

The story, with its series of CDs, reminded me of Jay Asher's Thirteen Reasons Why, but Tim is a much less whiny narrator.  I cared less for the other characters, who were thinly drawn.  And then, there's the matter of Tim's monomania -- a hallmark of tragedy, as the book points out -- which I found as annoying as I find it in Shakespeare (but that's my problem with the entire genre, not this book in particular).
Posted by Paul at 11:23 AM