Picture Me Gone, by Meg Rosoff 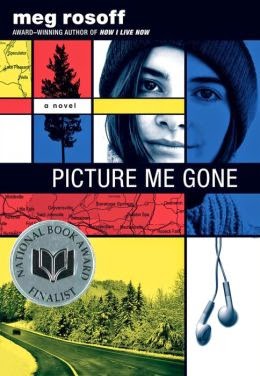 Mila, an unusually insightful teen, likens herself at the beginning of this novel to a terrier -- both in her ability to discern peoples thoughts and motives, and also because of her steadfast loyalty.  These traits prove useful when she and her father arrive in the States to visit her father's old friend Matthew.  When they arrive, they find that Matthew has disappeared.  No one know where he has gone or why he left, and the two of them set off into Upstate New York to find him.

The result is a gentle adventure (where the most danger they encounter is a little snow and some dodgy restaurants).  As is true in most literary road trips, the story is about self-discovery as much as finding they quarry. Spending the time with her father and learning more about his missing friend helps Mila understand her Dad better and also reveals things about herself.

The novel has potential, but never really delivers in the end.  The story is muddled.  While the blurb promises adventure, the plot is weighed down in ruminations and meditations.   The search itself - in many ways - is unsuccessful, even though some of its goals are achieved (being more specific would spoil what little suspense the book offers).  And once one reaches the end of the book, we are left (much like Mila herself) wondering why we started out in the first place.

Rosoff is fond of mood pieces. For her, the plot tends to seem like an annoyance that gets in the way of the emotion.  But the mood here -- a bit of lost hope and failed opportunity - is so melancholy and beige that it doesn't capture the heart.  It is all very pretty, but fails to engage.
Posted by Paul at 6:39 PM