To Be Perfectly Honest, by Sonya Sones 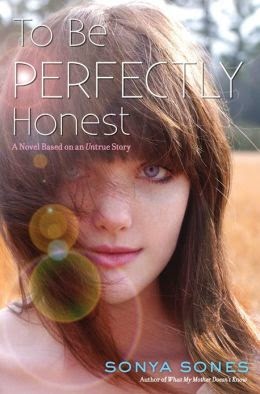 Colette is planning on taking her friends along with her for a fun-filled summer in Paris, but then her mother announces that she's just signed on to do a film in San Luis Obisbo (if you're unfamiliar with the thriving metropolis of SLO, look for the empty space on the map between San Francisco and LA!) and Mom's decided that she's taking Colette and her little brother along for some quality time.  Colette can't imagine a worse fate, until she meets a sexy guy named Connor who makes the summer much more interesting.

Or does it?  The problem is that Colette is a compulsive liar, prone to making up half of her adventures.  And for every truth that she tells, there's usually also a whopper mixed in!  That makes her real life very complicated and it spins the reader around a bit as well.

Sones's trademark is writing in verse, so this 480-page tome goes down in under two hours.  That doesn't make it thin and lightweight though.  She is truly one of the best in this little niche and she can craft in a lot of impact out of a fading thought or an angst-ridden title.   As for the story, it is pure predictable romance, but the ever-present deceit is a nice twist.  And the story itself is really stolen by Colette's lisping and potty-mouthed little brother.
Posted by Paul at 9:52 AM