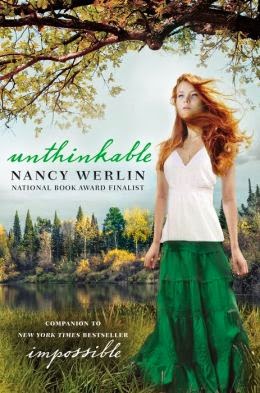 The curse of the Scarborough women was lifted in Werlin's earlier novel, Impossible, but Fenella Scarborough is still imprisoned.  When Padruig pronounced the original curse, he laid a second one on top of it: immortality.  And what might be considered a blessing by most people has simply meant eternal suffering from guilt for Fenella as she has been haunted by generations of her offspring whom she was unable to rescue from imprisonment during the past 400 years.

In order to end the second curse and be allowed to die and finally achieve peace, Fenella is informed that she must perform three acts of destruction against her own family.  Set free from Faerie with the company of the queen's brother in the disguise of a cat, Fenella must find a way to "destroy" her family (while causing the least amount of actual harm) and break the final hold that Padruig has over them.

While the backstory fleshes out how the original curse started, overall this novel lacks the depth of the original.  The original benefited from the rich source material of the "Elfin Knight" and is a hard act to follow - a perfect storm of a book that took a classic and fleshed it out in an exciting and original way.  This novel is a more average work and doesn't measure up. The companion novel is less rooted in anything of importance.

It also hurts the story to base the breaking of the new curse around acts of destruction, which seem much harder to justify.  One is immediately struck with the thought that Fenella's predicament is more of her her design.  Only later in the book does Werlin come up with a compelling justification for breaking the curse.
Posted by Paul at 5:26 PM