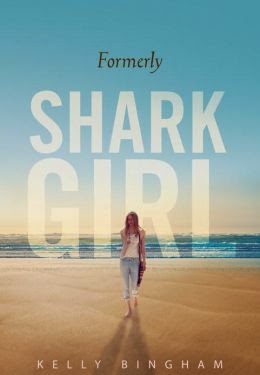 A year has passed since Jane was attacked by the shark, losing her arm in the process.  While the immediate aftermath of that was told in Bingham's 2007 book, Shark Girl, the author returns to her subject now to tell about the continuing healing process.  Surprisingly, for a sequel built on the same structure and same premise, the continuation is actually a far more interesting novel than the original.

A year later, Jane is still struggling with the psychological and physical trauma but determined to move on with her life.  The question, though, is move on to where?  Should she pursue her original dream of being an artist?  Or should she follow the inspiration of all the people who helped her through the last year and pursue a career in nursing?  In truth, she's not a natural in either (her artistry suffers from a loss of her muse and the physical challenge of learning to draw with her left hand; meanwhile, nursing requires stronger science skills than Jane has ever possessed).

Other themes also play a part in the story.  There's romance in the air (both for her, as well as for her mother who has started to secretly date again).  And finally, there are the never-ending letters from her "fans" -- people who tell her what an inspiration she is, much to her complete and utter astonishment!

While I still find Bingham's verse underwhelming (it takes a lot of skill to write a novel in verse!), I really did find the story more compelling this time around.  There's a greater distance from the trauma and Jane is focused enough to lend a strong direction to this sequel.  It's a more compelling adventure (moving on, rather than just healing).  In sum, it just works better.  And where the non-verse parts of Shark Girl were distracting, the letters from the fans in Formerly Shark Girl are well grounded to the story and provide an well-integrated Greek Chorus to supplement Jane's own musing.
Posted by Paul at 7:11 PM