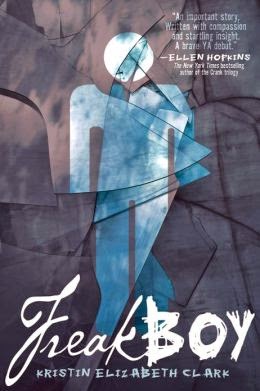 Brendan is a tough wrestler with a tough wrestling girlfriend, but he harbors a secret:  he's always been more comfortable around girls.  In fact, he's always been a bit jealous of them -- of the way they dress and how they act.  He even sometimes wishes he could be one.  But he's not gay!  He's just....awfully confused!

Vanessa, his girlfriend, can tell that something is wrong but she can't quite figure out what.  Brendan is distant.  He no longer seems to care about her.  She suspects he must have fallen in love with someone else.

And then there's Angel, a transsexual who's been on the streets for the past couple of years.  Early in the book, she randomly befriends Brendan, and she'll help direct him through his confusion, but her purpose to the story is really to show his future by telling the story of her past.

It's an ambitious original story exploring gender fluidity.  Told in verse through shifting points of view, it tries to capture not just the process of identifying with transexualism, but also the impact that such decisions have on others.  Clark's depiction is authentic, showing that a great deal of research went into this.  Her poetry is sophisticated and often quite good.

In my opinion, however, the story itself tries to bite off a bit too much.  While we get a great story about Brendan's acceptance of his identity, neither that story, nor in fact any of the subplots, truly wraps up.  Rather, this is an ongoing adventure, whether it is the relationship with Vanessa, Vanessa's own self-realizations, Angel's story and her own growth, or the overall future choices that Brendan will make.  That's realistic but frustrating for the reader.  It's an enticing story, but one which is left (for reasons of space or just ambition?) unfinished.  I wanted to learn more about Vanessa!

A tighter story with fewer subplots could have done more. For example, dropping the character of Angel altogether might have allowed the space to take the main narrative farther to a more satisfactory point of departure.
Posted by Paul at 5:37 PM