If You Could Be Mine, by Sara Farizan 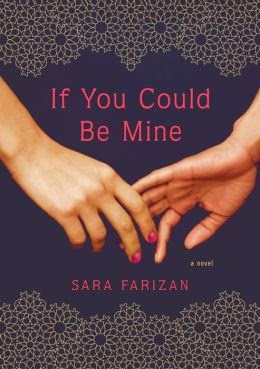 In modern-day Iran, homosexuality is a capital offense.  That makes the love that Nasrin and Sahar share a very dangerous situation.  Growing up, it's been easy for the two girls to hide the true nature of their feelings for each other.  But when Nasrin becomes engaged to the charming doctor Reza, it will all be over -- there is no way they can hide what they have been doing any longer.  Sahar becomes desperate to prevent the marriage and keep Nasrin for herself.  Thanks to her cousin Ali, who lives in the shady world of drugs, smuggling, and illicit sex, she discovers an unlikely and extreme solution:  a sex-change operation.  Because, while loving a person of the same sex is illegal, changing your sexual identity is not!

A truly remarkable story that shows a side of Iran that no one probably wants to see (or would believe even exists!).  I was fascinated by Farizan's accounts of gay bars, prostitutes, and illegal parties (keep in mind that consuming alcohol is illegal in Iran, so what does one make of opium!?).  But once we move beyond the titillation of these illicit scenes, there is a warm and authentic story of not just these two young women, but of their parents and friends as well.  The actual romance that forms the center of the story didn't have a lot of heat to it, but the honestly and depth of Sahar's feelings of loss, betrayal, and despair are heartbreaking and moving.  I was drawn to the book by the novelty of the story, but stayed for the appeal of the characters.
Posted by Paul at 7:26 PM