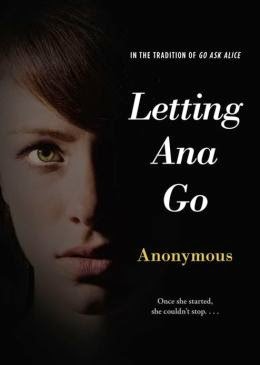 She always thought that girls with eating disorders who starved themselves to death were dumb.  Yet, when she sees her father abandon her mildly overweight mother in favor of a more streamlined girlfriend, she learns the importance of watching what you eat!  Along with her friend Jill (and Jill's mother guilt-inducing cheerleading), she starts counting calories and losing weight - in search of a perfect body that is always just a few pound less than her current weight.

The author has drawn out a pretty classic text-book case of anorexia nervosa (perhaps a bit more eager to blame the grown-ups than the media that normally gets the nod).  It's a book with a mission (one that few of us would disagree with) but not much to sell it.  The characters and story exist to scare or warn the reader of the perils of eating disorders.  It seems unlikely that most young readers would be unfamiliar with the concept already.

If not original, is it still a story worth repeating?  If someone reading this book learns enough from doing so that a death is averted, than some good will have been done.  The problem, I fear, is that the book probably can't do that for the simple reason that the story illustrates so well:  the behavior is not rational.
Posted by Paul at 4:16 PM