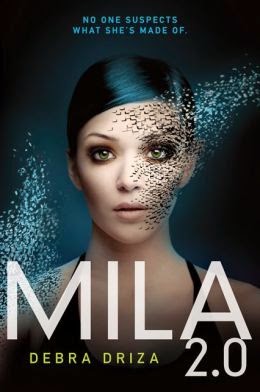 Since her father died in a fire, Mila has struggled with piecing back together her life.  She and her mother have moved to a horse ranch in rural Minnesota and Mila.  It hasn't been easy and the kids aren't very friendly.  When a new boy shows up and he and Mila bond over their newness, jealousy from the other girls turns things ugly.  That's when stuff starts to get weird.

An accident that should have been fatal to Mila proves to be just a minor scratch.  But the scratch itself reveals that Mila's innards are mechanical and she is something very different from the sixteen year-old girl she thought she was.  Soon, she and Mom are on the run, pursued by a wide variety of forces of evil.  Mila learns that she is an android built to be an ultimate fighting machine.  She proves to be a fierce fighter, but her fears and anxieties prove to be a handicap.  Can she overcome her reluctance to harm the people who want to kill her and save herself and her mother?

It's an odd story that starts as a basic teen romance but quickly moves into high speed chase and violence.  Comparing the first 100 pages and the last 100 pages are striking -- as if Meg Cabot met Tom Clancy.  I suppose it works in the sense that the beginning of the book gives us the background to appreciate Mila's human side, while her ability to drive a Camaro around downtown DC in a high speed chase comes much later.  I'm happier with the moody adolescent girl we begin with than the gradually dehumanized machine that she becomes (despite her struggles to the contrary).  But I guess I understand the appeal of the message that even a "normal" teenage girl can become a super deadly killing machine.

For those interested in the character, her struggles continue in the sequel that was just released last week.
Posted by Paul at 8:16 PM