The Midnight Dress, by Karen Foxlee 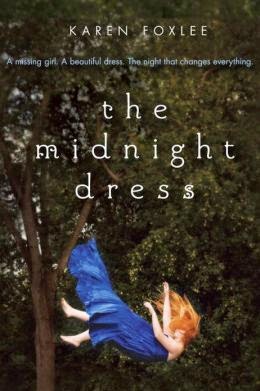 Rose and her father travel across Australia, rarely settling down for long.  So when they come to the town of Leonora, she figures that they won't last long.  But the town captures her imagination quickly.  She befriends a local girl named Pearl who is obsessively searching for her father -- all Pearl knows is that he is Russian and his last name is Orlov, so she is writing letters to every Orlov in Moscow.  Pearl is also obsessed with the local harvest festival and the chance that the girls have to appear in it in fancy dresses.  Rose has never worn a fancy dress, but Pearl convinces her to ask a mysterious local old woman (rumored to be a witch) to make a dress.  The woman accepts the request and, while Rose spends days with her helping to sew the dress, she reveals many secrets of her past.  In the end, one of the girls mysteriously disappears and is presumed dead.

The story itself is told in a broken narrative, with each chapter beginning with a police investigator trying to figure out what happened to the missing girl, and then the chapter switches back to the past where Rose and Pearl become acquainted, the dress is made, and things eventually fall apart.  More so than normal, the flashback approach is cumbersome and difficult to work through.  In the interest of being mysterious and "lyrical," the writing is dense and tricky.  I found it a lot of work to read and, in the end, not really worth the trouble (too much back tracking and confusion whenever I drifted and lost focus).  Reading shouldn't be that much work!
Posted by Paul at 8:40 PM