The Rules for Disappearing, by Ashley Elston 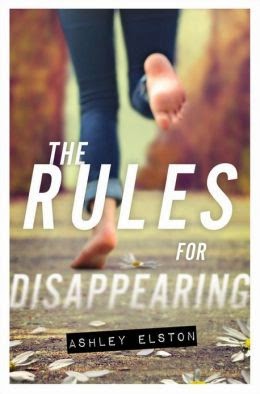 Meg and her family are in Witness Protection and have been relocated six times in the past ten months.  Each time, they are forced to assume a new identity.  Meg doesn't know why they are hiding out - her parents won't tell her - but the strain is wearing everyone out.  Dad is continually on edge, skulking around, and having angry private conversations with strangers.  Mom has dived into the bottle and turned her social drinking into a major problem.  Meg's little sister is fleeing every time men in suits show up, afraid that they are about to be relocated again.

Meg is convinced that this most recent relocation needs to their last.  She wants answers to why they are hiding and has started sleuthing to figure out what is going on.  She has also decided that, after numerous hasty departures, that she won't get attached to anyone or anything this time - no clubs, no friends, nothing to miss if she has to leave again.  But that plan is thrown when she meets Ethan!

A little slow to start and periodically rough (the "rules for disappearing" at the beginning of each chapter are consistently silly and unnecessary), the story does pick up as it goes along.  Also, important for a story with lots of subplots, Elston does a great job of tying everything together into a satisfying conclusion.  Some of this gets a bit too neat and convenient, but it's a good piece of escapism (no idea, however, about whether the sequel coming out later this month can keep up the magic!).  The romance did less for me than the action, but thankfully Meg and Ethan's relationship is not a critical part of the story.
Posted by Paul at 11:48 AM