Flowers In the Attic, by V. C. Andrews 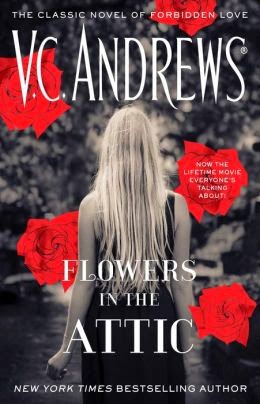 So, if I'm reading YA literature in my late 40s, what was I reading when I was actually in the demographic?  Mostly science-fiction and fantasy.  However, if I had been reading YA in the early 80s, I probably would have cracked this book.

The story is infamous enough:  Recently widowed and desperate mother returns to her parents' home to live with her sadistic parents.  Because her father would not approve of the fact that she had offspring with her late husband, she hides her four children in the attic of their grandparents' huge mansion.  For several years the children live in these cramped corners and endure all sorts of mental and physical tortures.  And the two oldest children develop a strong bond that eventually spills over into incest.  Several sex scenes - while tame and fairly oblique by modern standards - were probably mandatory reading by teen-aged readers at the time.

It's a classic and spawned a major literary phenomenon (five books in the series and two film adaptations -- the most recent just a few months ago).  It is a book that will not die.  Yet, it doesn't really have that much objective literary merit.  It's depressing and rather plodding:  the kids suffer and then they suffer some more.  After a while, there is more suffering (you get the idea!).  The prose is turgid -- intended to emulate Dickens, but without much of the wit.  And the naughty bits, as previously mentioned, are pretty tame by modern standards.
Posted by Paul at 5:15 PM