Now I'll Tell You Everything, by Phyllis Reynolds Naylor 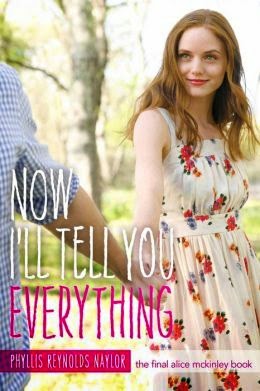 Alice McKinley has grown up.  She's left home and started school at the University of Maryland.  But unlike the other books in the series (that tackle 4-6 months of Alice's life at most), this book covers the next forty-two years of her life -- including marriage, children, and grandchildren.  It's a longer book, but still a whirlwind of activity.  The details, of course, are all spoilers, but suffice it to say that Naylor covers pretty much all of the key moments of Alice's life (although not quite to the funeral).

I really had not intended to read this book.  As the twenty-eighth (and final) book in the series, however, I felt obligated to finish what I had started.  Keep in mind that I absolutely despise series books so the simple fact that I read the entire series -- over the past fifteen years -- is an impressive endorsement.  The series has always impressed me for its realism and painstaking detail, but my love is tempered by my frustrations.  The books covering Alice's younger years work well as middle readers, but as Alice hits adolescence and gets older, the chaste style of Naylor's writing grates.  It's not that the books lack sex (far from it, Naylor packs the later books with plenty of good sexual information in a Judy Blume tradition), it's the moralistic and preachy quality that never feels quite right.  The later books also lack much cohesion -- being, instead, anecdotal and disjointed.  A few individual books (Reluctantly Alice, Alice In Between, and Dangerously Alice) stood out by being thematic and more plot-driven, but for the most part, Naylor has preferred unrelated events that are age-appropriate for the given book, delivered by the often too-perfect Alice.

In the breezy survey of the bulk of Alice's life that the current tome covers, these issues are even more pronounced.  The chapters read a bit like Christmas letters and the speed at which events go by leaves us with very little story to grasp on to.  And because the events speed up as the years go by (200 pages on four years in college, leaving 300 pages to cover 38 years of life), the sense of disconnect simply grows as you read the book.  There are plenty of sad, joyous, and poignant moments, but nothing sticks for long.
Posted by Paul at 8:43 PM

Like you, I felt I had to read this, but didn't really want to. I vastly orefer the first, oh, six books in this seriesbefore they became too messagey. Have to feel for Naylor, though-- I'm sure she has spent so much time with Alice that this book was hard to write.