Promise Me Something, by Sara Kocek 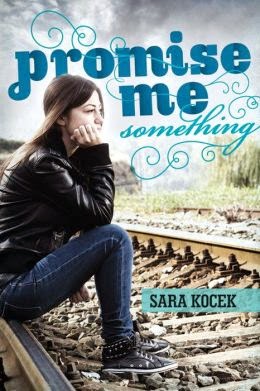 Thanks to redistricting, Reyna gets assigned to a different junior high school than her BFFs.  As one of the only "new" kids at the school, she has a hard time making friends.  So, she settles for Olive, an extremely intense girl who everyone else seems to avoid.  Olive has definite anger issues and has an unfortunate habit of saying whatever pops into her head.  But, over time, Reyna grows to like her.  That lasts until Reyna discovers that Olive is a lesbian.  While she doesn't consider herself homophobic, Reyna doesn't want the other kids at school to get the wrong idea and she puts distance between herself and Olive.  This does not go well and, after a tragic incident occurs, Reyna has some major soul searching to do in order to straighten things out.

Numerous subplots also have their place in this story (including Olive's alcoholic mother, Reyna's discomfort with her widower father getting re-married, the growing chasm developing between Reyna and her old friends, a homophobic teacher, a runaway teen, and even a romance).  It's these subplots that are probably the weakest part of the book.  Any one of them would have been sufficient, but together they seem a bit excessive.  Resolving all of them satisfactorily is nearly impossible and the wrap-up is a bit perfunctory.

But the book simply soars on the strength of its characters.  Reyna feels unusually authentic.  She is not a character that one will like at first, but her personal growth feels real and you gradually like her. As painful (and maybe even distasteful) as it was to watch her rejection of Olive's homosexuality, it felt realistic.  The fluidity of the relationships overall (as Reyna flits from one circle to another) also felt painfully right for the age group.  By getting the kids right, Kocek is able to make a story which is otherwise set in very stereotypical settings (even including the traditional unsupervised party) feel extraordinary fresh.  Anyone who reads a lot of YA knows how the characters are supposed to interact, but Reyna defies those expectations and takes us places that just feel better and more appropriate.
Posted by Paul at 11:55 AM