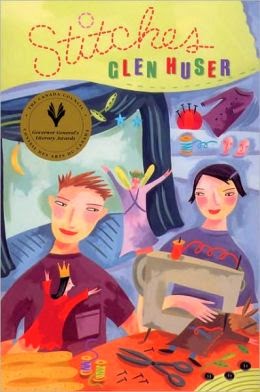 Travis and his friend Chantelle have long been a focus of unwanted attention from the local bullies.  If you ask Travis's uncle, however, Travis just brings it on himself.  Between hanging out with girls, a love for puppets, and some serious sewing skills, Travis isn't exactly sticking to normal gender stereotypes.  And while Travis doesn't want to stand out as different, it's hard to do otherwise when he enjoys puppetry, sewing, and his friend Chantelle so much more than "boy" stuff.  Set in a small Alberta town, the book also provides a vivid look at what life is like in rural Canada.

A bit of a mixed bag for me.  I like the idea of Travis and the portrayal of life in Acton, Alberta was interesting (albeit a bit depressing), but the book was hard to engage with.  There are a lot of characters and the pace is uneven.  The drama of the bullies is artificially drawn out by Travis's unwillingness to seek help (an issue that is never really addresses, although even he admits it is pretty stupid by the end of the story).  And, while Huser does a decent enough job with exposition, the conclusions are pretty rushed affairs.  The ending itself comes out of left field and reads more like an epilogue, as if Huser couldn't quite find a way to end the book.