The Impossible Knife of Memory, by Laurie Halse Anderson 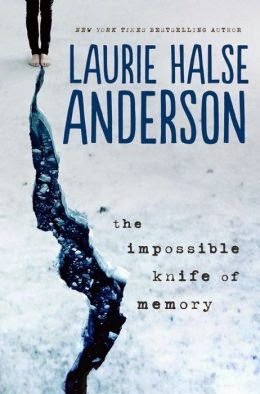 The injuries that Hayley's father received in the war are only partly physical.  Rather, it is the psychic traumas, the ones that can't be easily seen, that hit him the deepest.  And while Hayley desperately wants her father to get better, she wants him to stay even more.  He may have trouble holding down a job, making ends meet, or even keeping his sanity, but as long as she has him, it is enough.  Or, rather, it has to be.

It comes at a terrible cost.  After five years of caring for her PTSD-suffering father, Hayley's own life is coming loose at the seams.  While intelligent, she barely functional in school, alienated from her peers, and struggling to maintain any social connections.

Anderson wrote one of my all-time favorite YA books (Speak) and a number of less-notable other novels since then.  This one nearly breaks the recent streak.  I found the story deep and insightful.  It sensitively explored what combat does, not only to soldiers, but also to their families.  In fact, it nearly stands out as being in the same caliber of Speak, except for one (in my mind) fatal decision: a very weak story.

On its face, this book shares a lot in common with Speak.  Both books are about people who have suffered terrible traumas and their attempts to heal.  The difference is that while Melinda was the central character in Speak, Hayley's father is simply the instigator of the drama of this story.  And, while Melinda's search to regain self-worth drove that earlier novel's story forward, here, Hayley's father's problems serve mostly to drag Hayley down.  The Impossible Knife of Memory is about pain and suffering, but more than anything it is about co-dependency.  Drama is what drives any storyline, but when the drama is based on character stubbornness and refusal to accept help, my patience with the story and the characters frays.  I get that the dad is proud and I get that this arrogance rubs off on his daughter, but at some point I care less and less what happens to them.  There is tragedy here, but it is so easily resolved (in the last ten pages when the characters just suddenly start accepting help after 380 pages of refusing to do what they are told) that one wonders what the point was.
Posted by Paul at 7:44 PM