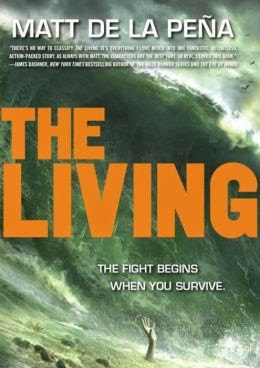 Shy comes from a town on the border just south of San Diego and his job on a luxury cruise liner opens his eyes to the immense wealth that some people enjoy.  He's hoping to make some money and get his mind off of the recent death of his grandmother to a new virulent disease called Romero.  But on his first trip out, an upset older man commits suicide right in front of Shy.  Soon, Shy finds that all sort of figures are interested in what Shy saw before the man died -- Shy is being followed, his cabin broken into, and a man in a black suit makes vague threats against him.  Meanwhile, Shy has other issues closer to home.  He's grown close with a fellow crew member Carmen (who is engaged but seems interested in Shy).  And, from back home, Shy learns that his nephew has now contracted Romero's.

The story, however, takes a sudden left turn when a huge earthquake levels California, sending a massive tsunami out into the ocean and threatening the ship.  By the time that threat passes, Shy finds himself on a wrecked lifeboat, in the company of a spoiled young woman named Addie.  Larger dangers await!

Sometimes, even I need to take a break from the "pink" books, but at the end of the day the mindless violence, nonsensical plots, and sheer brutality of action stories doesn't really do that much for me.  I kind of liked the dynamic between Shy and his crew mate Carmen (and even Shy's budding attachment to Addie), but the romance never really develops very far and character development is not a major focus here.  I think I'll go back to my usual stuff again.
Posted by Paul at 3:15 PM