The Theory of Everything, by Kari Luna 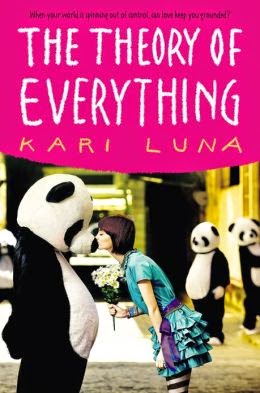 Sophie, like her father, is obsessed with late 80s alternative rock.  She considered it one of the few ties she has to the man, since he walked out on her and her mother four years ago.  But there are apparently other similarities.  She’s been having “episodes” where she leaves reality for a few minutes at a time (sometimes to a place where rock videos come to life, sometimes to a world with giant pandas, and sometimes to a land where inanimate objects  come to life).  These experiences, she learns, are similar to what her father went through when trying to explain his theory about the universe.  With that realization and a desire to prove to her mother that she’s not losing her mind, Sophie and her friend Finney go to New York to search for her Dad.

It’s hard to succinctly summarize this quirky and original novel.  The late 80s rock thing is old and tired but Luna gives it the most original twist she can.  The rest of the book is just way out there and loads of fun.  What can you say about a giant panda named Walt?  Or hallucinations about jamming with The Cure?  Or just the funky weird way that even the normal people are in this story?  Or about how seriously the characters are  about love’s relationship with theoretical physics?  It’s weird, lively, and worth a read as one of the more unusual YA books of the year!
Posted by Paul at 4:51 PM