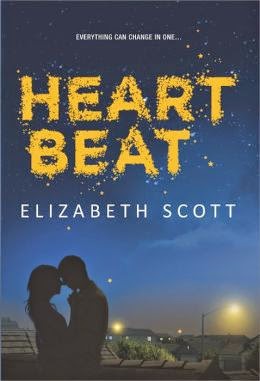 Emma had always liked her stepfather and was looking forward to being an older sister to the baby that her mother was carrying.  But that changed on the day that her mother died and Emma's stepfather unilaterally made the decision to keep her alive on life support until the fetus could be delivered.  In Emma's mind, it is unbelievably selfish that he would keep Mom going as some sort of baby factory.  And while he tries to explain his decision, Emma refuses to accept it.

Caleb is a troubled rich kid.  First, he had a drug problem and then several brushes with the law involving damage to his family's property.  Emma, as a clean-cut valedictorian, should not want to have anything to do with him.  But, as it turns out, he's struggling with loss as well (the death of his younger sister, for which his parents hold him accountable).  And, as they share something in common, they are drawn to each other.

It's a bit slow going.  Emma's standoff with her stepdad is well-established early on.  After that, there really isn't any place to take that storyline.  So, we get little tiffs and skirmishes repeated ad nauseum with little gained in the process (yes, they are not communicating -- I get it, now move on).  As for "bad boy" Caleb, it just seemed a bit too convenient and easy (why is Emma the only one to notice that he's actually a kind and sensitive kid?).  The ending was good, but the story leading up to it seemed predictable and routine.
Posted by Paul at 4:11 PM