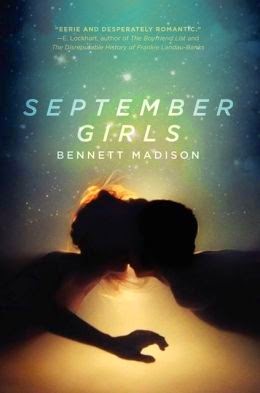 After six months of caring for his depressed father (after his Mom walked out on them) Sam has pretty much had it.  So, when Dad suggests that they just leave (even though school isn't quite over) and go to the beach, Sam is ready for a new adventure.  But he isn't quite prepared for what he finds.

The little beach town to which they come to stay is inhabited by two types of young women -- the normal type (girls) who show no particular interest in Sam (and don't particularly interest Sam either) and the Girls.  The Girls are fashionably dressed, all look like super-models, smoke French Gaulois cigarettes, and are mostly named after perfumes or cosmetics.  They are exotic and otherworldly and, in some sort of satire of male fantasy, profoundly interested in having sex with Sam and his older brother.  But there's a lot more to these young women's mystery.

Now, as it happens, I read this book during a bad travel day (late and cancelled flights, running through airports, etc.) so that probably affected my impression of the book, but it simply failed to engage me.  I get the way that Madison was using the otherworldly Girls of the island as a way to express adolescent male mystification about females.  I even think it is rather clever.  However, the story is so abstract and so unwilling to lock itself down (random events keep popping up to disrupt the storyline) that it is a very hard read.  I found myself reading and re-reading pages over in order to capture some obscure but very important plot point.  It was simply too hard to read to be enjoyable.
Posted by Paul at 5:59 PM