The Bridge from Me to You, by Lisa Schroeder 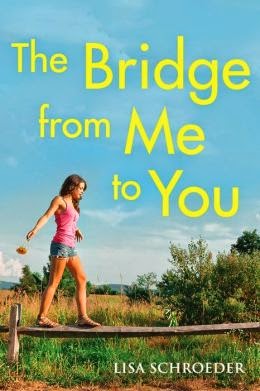 When Lauren's mother throws her out of her home, Lauren doesn't have a lot of choice about where to go.  Only her aunt and uncle are willing to take her in.  And so she arrives at their house in the small town of Willow OR, with a handful of secrets about why she had to leave and why her mother doesn't want her around.

Colby is a talented player on Willow's football team.  That fact alone should disqualify him as a potential romantic interest since Lauren can't stand the game, but they hit it off nearly immediately and have great chemistry.  Part of the reason for this is that he harbors a secret of his own:  he doesn't actually like the game.  Rather than play, he'd rather study bridges.  But a football scholarship might still be best way for him to get to study civil engineering in college.

The romance that develops between the two of them is pretty smooth sailing and doesn't really drive the drama of the story.  Instead, Schroeder throws in some health scares with their families to keep the narrative going.

It's charming and, while the plot is hardly original, Schroeder utilizes an interesting structural device:  Colby's story is told in chapters of prose, while Lauren's are told in verse.  This makes her seem even more angsty than normal for a teen and also carries a serious drawback -- she gets largely shortchanged in character development.  The density of Colby's chapters mean that we end up knowing a lot more about Colby than Lauren.  I'm not sure I'd recommend this particular literary approach.


[Note:  I received a free copy of this book in return for my consideration and review.  While an inattentive flight attendant managed to spill water on the book, I'm hoping it will still be of use to my local public library to where I will donate it now that I have finished with it.]
Posted by Paul at 4:05 PM