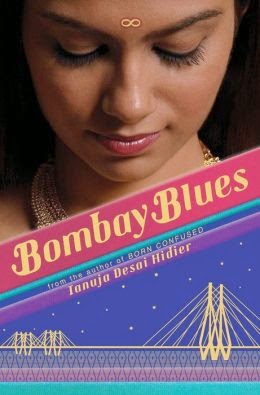 Dimple Lala (introduced to us in Born Confused) is now studying at NYU and has become well-integrated into New York's club scene.  Her boyfriend Karsh is a DJ who specializes in Banghra mash-ups.  As the story begins, Dimple and her parents are going back to Mumbai to see family, celebrate an anniversary and a wedding, and generally soak up some hometown vibe.  Karsh is also going to be there as he's landed a breakthrough gig.

Things don't quite work out as planned, but the entire point of the book is to show that, in a city as big and as diverse as Mumbai, closed doors are always paired with open ones.  And for every opportunity that doesn't quite pan out, others appear.  Karsh's job doesn't work out but he goes in search of godhead instead.  Dimple finds herself pursuing other interests as well.  And even the family plans get thrown asunder.

All of this is told in Hidier's breathless and evocative prose, mixing New York club slang with hybrid English-Hindi in an argot that is quite unique (and which begged a glossary for the clueless suburban reader!).  The style is lyrical and colorful, but maddening difficult to crack.  The jargon meant that I found the book pretty slow going in the beginning.  The end grew difficult for another reason as Didier's narrative starts to crumble (a dubious stylistic decision driven more by artistic coolness than a desire to tell a story).

Didier obviously enjoys the city of Mumbai and lavishes a huge amount of text on describing her observations (probably an outgrowth of journaling there for a year in preparing this book).  Sometimes this works (for example, when she draws out a nice mini-essay on the semiotics of the new Bandra-Worli Sea Link) but mostly it seems like so much digression.  The story frequently takes a backseat to Hidier's love affair with Mumbai.  I longed for more of a story, some pruning of her descriptions, and a shortened book (at 550 pages, someone should have been doing more editing!).


[Disclosure: I received a copy of this book by soliciting the publisher for an advance review copy, which I'll be donating to my local public library. This did not affect the opinion expressed here.  The book is scheduled for release on August 26th.]
Posted by Paul at 1:30 PM