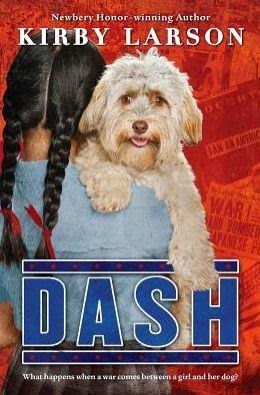 Eleven year-old Mitsi loves her dog Dash, her family, school, and her drawing.  She understands that sometimes boys like to bully people, but she doesn't understand why people have gotten so mean to her and her family just because they are of Japanese descent.  Yes, the United States and Japan are at war, but she and her family are Americans!  Then, she learns that all the Japanese people in Seattle are being rounded up and relocated to a camp far away.  With just a week's notice, her family has to sell everything and pack up.  Worst of all, she's been told that she can't bring Dash with her - no pets are allowed!

A kind neighbor agrees to take care of Dash and sends her status reports during their separation.  That correspondence gives Mitsi a release and allows her to cope with the horrors of her family's incarceration.

A well-researched and well-told story of Japanese-American relocation during WWI through the heart-wrenching hook of a girl separated from her pooch.  What's not to like?  Mitsi and her family have hearts of gold and are sometimes too good to be true, but the detail is so rich and so interesting, that the story just moves you right along.  This is a lovely piece of historical fiction (based on a true story) that captures and personalizes a shocking moment in American history.


[Disclosure:  I solicited and received a copy of this book for review.  Having really enjoyed this book, I plan to keep the copy I received, but it did not affect my review.]
Posted by Paul at 8:29 PM