Faces of the Dead, by Suzanne Weyn 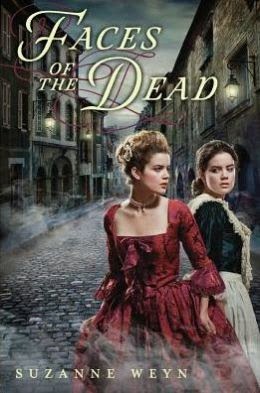 People have often noted the physical similarities between Marie-Therese, daughter of the King of France, and her chambermaid Ernestine.  And the two girls have taken advantage of their appearance from time to time to switch roles.  It's all been in fun until the Revolution comes and Marie-Therese finds herself on the outside, while Ernestine plays her role with the condemned royal family.

Out on the streets, Marie-Therese befriends a young man named Henri. He is helping the future Madame Tussaud, Anna Marie Grosholtz, collect dead bodies to make wax death masks.  Grosholtz, however, is really learning voodoo spells from Rose de Beauharnais (a.k.a. the future Josephine Bonaparte) to help reanimate the spirits of guillotined nobles in wax bodies.  Through all of this, Marie-Therese mostly alternates between swooning and trying to reunite with her family (and then eventually escaping again).

The whole story is, in sum, quite ridiculous!  The body double business has been done often enough before and might have made a fine story on its own.  But combined with the voodoo stuff it just gets silly.  The writing style seems forced and the characters are quite annoying.  Marie-Therese is the proverbial house cat: unable to decide if she wants to be inside with her family or out free on the streets, she sneaks in and out several times.  The boyfriend is entirely too modern to be believable.  Every other character is disposable and forgotten.  What a silly mess!


[Disclaimer:  I received a copy of this book as an unsolicited ARC.  I received no compensation for my review and consideration.]
Posted by Paul at 9:49 PM