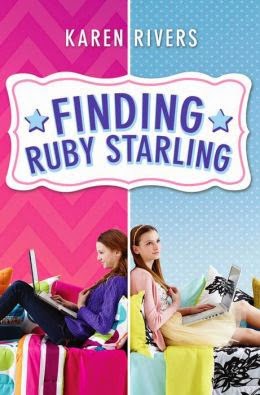 A mixture of emails, letters, poetry, and other media form the structure of this story of two girls who meet online and determine that they are in fact twin sisters, separated at birth.  Ruth lives in America, while Ruby lives in England, so they have plenty of differences, but they find that they also have a great deal in common.  Subplots involving their friends (including a rather bizarre one about making a movie about shark-orca hybrids) also figure in.

Told almost entirely through correspondence, most of the decent dramatic moments happen off-stage and in re-telling.  That sucks much of the energy out of the story.  It's also a major chore keeping all of the characters straight in this busy narrative (many of the characters come from a previous book; one imagines that another installment is probably in works -- and these two facts help explain the plethora of dramatis personae).  By the end, I had pretty much caught up to the flow of the story, but for a story which is basically about two girls being reunited, the whole thing seems distracted and off-focus.


[Disclosure: I received a copy of the book in advance for the purpose of writing this review.  I received no other compensation and will be donating my copy to the public library.  This book is scheduled for release next week.]
Posted by Paul at 12:10 PM