In the Shadow of Blackbirds, by Cat Winters 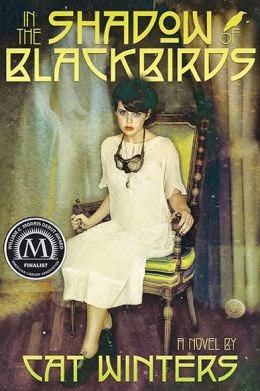 In 1918, after her father is arrested for treason for discouraging men from enlisting, Mary is sent to live with her aunt in San Diego.  It's a dangerous time:  the country is at war and the world is being ravaged by the deadly Spanish Flu.  Mary's beau Stephen has shipped off to the Europe.  When he returns dead, Mary develops the idea that she can communicate with him.  The stronger that link becomes, the more she grows obsessed with the belief that something horrible happened to him that she must now try to set to rights.

A complex and interesting novel that combines historical fiction and the paranormal.  It actually reminded me a bit of that old Kevin Bacon film (Fade To Black) in the way that the dead reach out to the receptive living to fix injustice (although one could cite Ghost as well, I suppose!).  In that vein, the story works well as a truly creepy thriller.

But there's the more interesting historical part.  Fascinating details about the impact of WWI on the home front, the rebirth of spiritualism, as well as the flu pandemic fill out this story and fix it (at least partly) in reality.  Period photographs (some of them quite freaky) give the book a great design.  I enjoyed its originality and creativity.
Posted by Paul at 3:40 PM